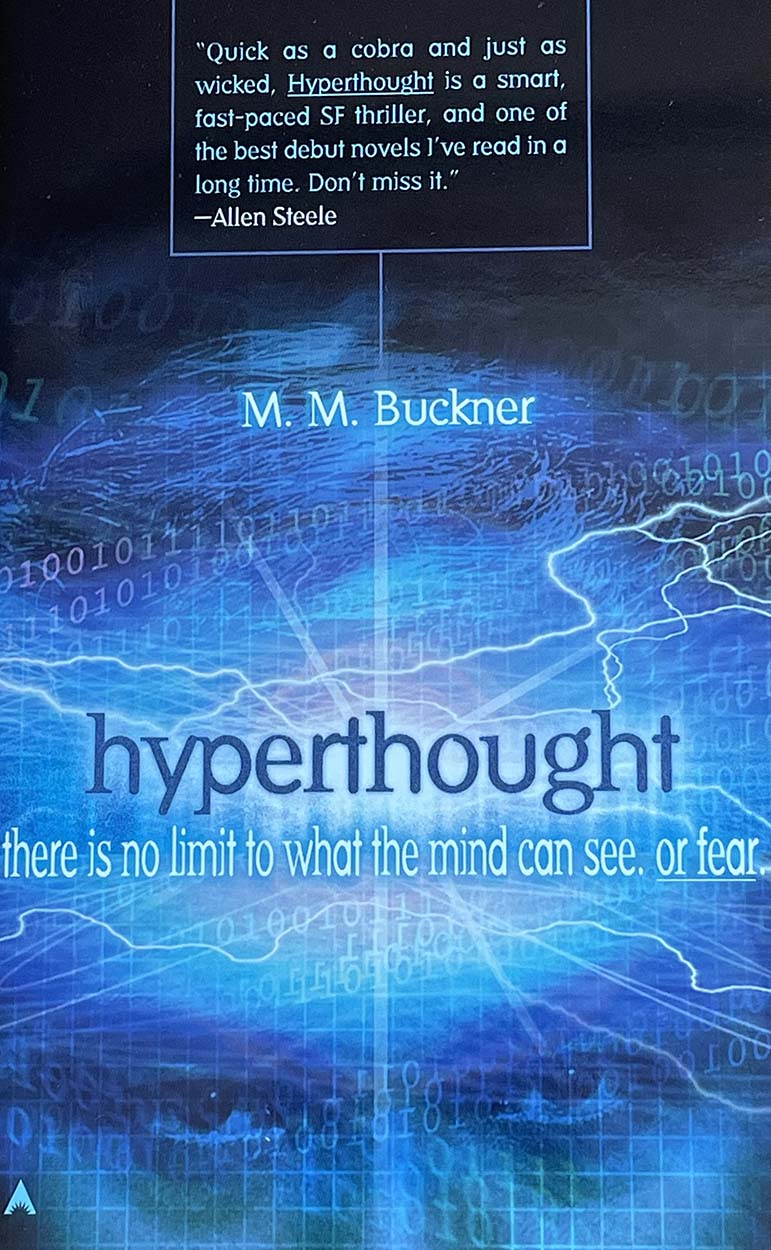 Earth’s changing climate has rendered vast areas uninhabitable, and feisty little Jolie Sauvage leads extreme adventure tours of these areas for rich executives. Hyperthought recounts the adventures of a young man who trusts an unscrupulous doctor to enhance his brain function, and of Jolie’s relentless struggles to save him.

“Quick as a cobra and just as wicked, Hyperthought is a smart, fast-paced SF Thriller, and one of the best debut novels I’ve read in a long time. Don’t miss it”
— Allen Steele, Hugo-award winning author of OceanSpace

“This is one successful adventure story and a neatly packaged allegory on thought and the future.”
— Booklist Magazine

“A smart and sassy first novel. M.M. Buckner will be around for a long time.”
— John C. Snider, SciFiDimensions.com

“From the first sentence to the last, this book is in turn poignant, thought-provoking, and action-packed, all at the appropriate times.”
— Galen Strickland, The Templeton Gate

By the mid-21st century, global warming has rendered the surface of the Earth uninhabitable. The population live mostly in crowded underground cities far from the equator, breathing processed air – their governments run by draconian mega-corporations called “Coms”.

HYPERTHOUGHT is the first novel from Nashville-based M.M. Buckner – and it’s a good one. It’s a hip, fast-moving action adventure with a cyberpunk feel. It’s also a bit reminiscent of Norman Spinrad’s Greenhouse Summer – both thematically and stylistically. And maybe – just maybe – it gives us an excuse to actually like the French.

Buckner’s depiction of Jolie’s world is vibrant and believable, except for some less-than-imaginative Capitalists-versus-Proletariat political intrigue. Buckner tosses in lots of nice little touches that could easily have been overdone, notably Jolie’s Euro-slang and her hinted-at scientific religion (complete with references to “Saint Einstein” and “praying to the Laws of Physics”). And not to give anything away, but the results of Jin’s “hyperthought” development are more subtle and ambiguously intriguing than one might expect – again, a wise use of restraint over sensationalism.

I highly recommend HYPERTHOUGHT. It’s a smart and sassy first novel -and if it’s any indication of her talent, M.M. Buckner will be around for a long time.

HYPERTHOUGHT is the first novel from M. M. (Mary) Buckner, from Ace Books, one of the most prestigious publishers of SF. It is a very impressive debut, and I look forward to further works from her. I think we will be hearing about next year when it comes time for awards nominations. [Added note: this book was a finalist for the Philip K. Dick Award, presented to the best novel published as a paperback original.]

Set on an ecologically ravaged Earth where humanity has been forced to abandon the surface for domed, underground (and undersea) habitats, the main action takes place in the year 2125. The first-person narrator is Jolie Sauvage, a young “tunnel-rat” orphan from under-Paris, whose chance discovery of a surface-suit inevitably leads her to form her own business, guiding high-thrills eco-tours on Earth’s toxic surface, catering to the rich.

From the first sentence (“We lose our lives even as we live them.”) to the last, this book is in turn poignant, thought-provoking, and action-packed, all at the appropriate times. Jolie is a well-developed character, tough and resilient due to the harsh conditions of her youth, and yet fragile and vulnerable as well, especially in regards to her developing love for Jin, one of her wealthy clients.
There is an interesting juxtaposition of Jin’s struggle with that of his namesake, Prince Airlangga of Java. This 11th Century Indonesian hero’s reign spanned 23 years, and launched an economic and artistic renaissance in Java and Bali. His story is told in the epic poem “Arjunavivaha.”

The harsh conditions depicted are supposedly due to global warming causing drastic changes in the environment, from flooding of coastal cities to the buildup of toxic chemicals in the atmosphere. I am skeptical of global warming in general . . . Also, throughout the book Jolie frequently uses several stock phrases in French, and they seem to not always be used properly, but of course I’m willing to admit I may be wrong about that. Other than these two quibbles, I would recommend the book, and hope it is successful enough to ensure that Ace (or another publisher) will endeavor to aid Ms. Buckner for many years to come.