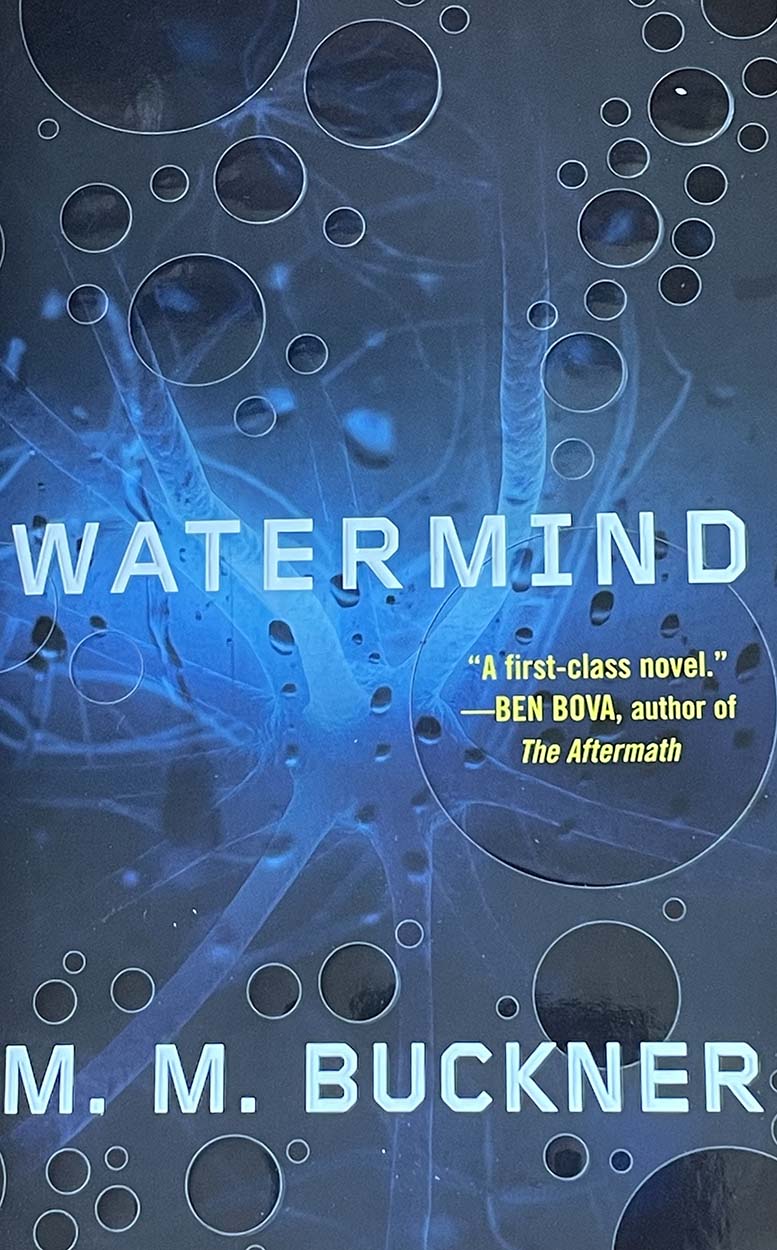 Every day, the Mississippi River carries up to 400,000 tons of microchips, nanotubes, pharmaceuticals, genetically modified seed, strontium 90, and more from over half the US and parts of Canada. For years, it has lodged in the Louisiana delta, and now a mysterious entity stirs in a polluted canal – a self-organized neural net in the water born from the waste-stream of our own civilization. Will the locals kill the beast, or will they learn to communicate with the first sentient life to evolve on Earth since humans?

“Watermind is novel that works the interfaces between any number of genres, where the best modern fiction is now evolving.”
— Asimov’s Science Fiction

“The action comes crisp and smart in this fast-moving novel, rich in ideas. I liked it a lot.”
— Gregory Benford, award-winning SF author

“M.M. Buckner’s Watermind is powered by a lean, reaching prose, a protagonist so real you can practically reach out and touch her, and a tight techno-savvy plot that will leave you exhausted! The best book I’ve read in years.”
— William C. Dietz, reviewer

Although Buckner’s novel, WATERMIND, was published by Tor, a long-standing last bastion of genre science fiction of literary quality, it is, I would contend, the sort of post-genre speculative fiction we are seeing more and more of in these latter days.

There is a superficially hard SF premise, namely that the profligate dumping of all manner of electronic garbage into the Mississippi River system—cell phones, batteries, motherboards, television sets, microchips, solar cells, whatever—has combined with the superabundance of complex chemical sludge and microorganisms therein to create a kind of electro-organic hybrid organism, the WATERMIND of the title, a bioelectronic neural network evolving into a kind of sentience. The liquid techno-lifeform, which has come into being in a backwater “Devil’s Swamp” near Baton Rouge, grows, evolves, oozes and then speeds into the Mississippi toward New Orleans and the open sea beyond, perhaps ultimately threatening technological civilization itself. The story is that of a cast of characters trying to prevent it.

You can already see the movie of which WATERMIND could be the novelization, as one more giant amorphous monster from the Swamp threatens the end of Life As We Know It and our doughty crew of heroes seeks to save civilization from mucoid doom.

That would be the straight genre version. But that’s not what Buckner has written. It may seem that the McGuffin of the novel, the combining of e-trash and chemical pollution to create the WATERMIND, is very rubbery science indeed, best taken as a grand cautionary metaphor, and therefore turning the novel into fantasy. But that’s not the way it feels, because Buckner has taken enormous care and apparently done exhaustive research to make this politically correct green conceit scientifically believable on a literary level.

And that is the very essence of not merely science fiction, but hard science fiction. And the physical action of the story—as a brilliant young female scientist, her musician and worker lover, a ruthless corporate CEO, and a cast of other technically proficient characters chase, track, attempt to destroy, communicate with, and even save the WATERMIND —is more of the same. It’s an exciting novel of technological and scientific detection and combat, in the course of which Buckner masterfully brings to life the diked, leveed, dammed machinery with which technological civilization has tamed the Mississippi, or at least tried to.

But WATERMIND is also a sort of sub-species of the Southern Regional novel, a novel of place, in which the region of Louisiana through which the Mississippi wanders from Baton Rouge to New Orleans is a major character too—the landscape, the flora and fauna, the local deni-zens, the music, the food, the patois.

And this being Louisiana, it is also a novel steeped in the mystical and religious ambiance thereof, a rich gumbo of Christian fundamentalism, gris-gris, voodoo, laced with a corruption that itself borders on the cultural. Then too zydeco, the music thereof, plays a key part of the plot itself on a technological level that is rendered in considerable musicological depth.

Yet beyond and within all of that, WATERMIND is almost dominantly a novel of character—that of the psychological, emotional, and sexual relationships of the young female scientist, her “lower-class” musically adept lover, her dead father, the Argentinean CEO of the corporate entity pursuing the WATERMIND, indeed the alien entity itself.

So what we have here is indeed a post-genre novel, a novel that works the interfaces between any number of genres, where the best modern fiction is now evolving. But WATERMIND is most definitely not “a romp through the biohazardous wastes of post-genre literature” by a day-tripper rummaging through the detritus thereof for material to recycle for “higher literary purposes.” Buckner is obviously a writer well-schooled enough in and respectful of this cultural and literary motherload of material, tropes, and techniques to move freely within it in a knowledgeable, serious manner rather than ignorantly exploiting it like a snobbish literary tourist.

Nevertheless, this “post-genre” work of speculative fiction is being published by a genre publisher—by arguably the most literarily sincere and idealistic of “SF” publishers—which is all too likely to leave it floundering in the sucking mud of the commercial swamp that genre publishing has become in the twenty-first century, despite the best efforts of Tor.

This is the dilemma of the serious writer of speculative fiction at the turn of the twenty-first century. If you truly understand the material and have learned the techniques evolved to deal with it by your literary ancestors over a century, you almost have to have had a track record as a “sci-fi” writer, and your work is going to be marketed to a dwindling readership that is not really the one you’re after in the first place these days. And if you’re just starting out, you’re likely to have your work channeled into that machinery from the outset unless you get lucky or happen to have unusually precocious publishing street smarts.

If you’re trying to exploit the central literary material of the twenty-first century from outside the genre ghetto without knowledge of and respect for what’s been accomplished with it in the past and how it was done, the chances are you really won’t be able to do it literary justice yourself, because the attitude of the dominant literary culture toward “genre” is going to discourage you from even trying to learn how. Or even why. That’s where speculative fiction has arrived at in the twenty-first century