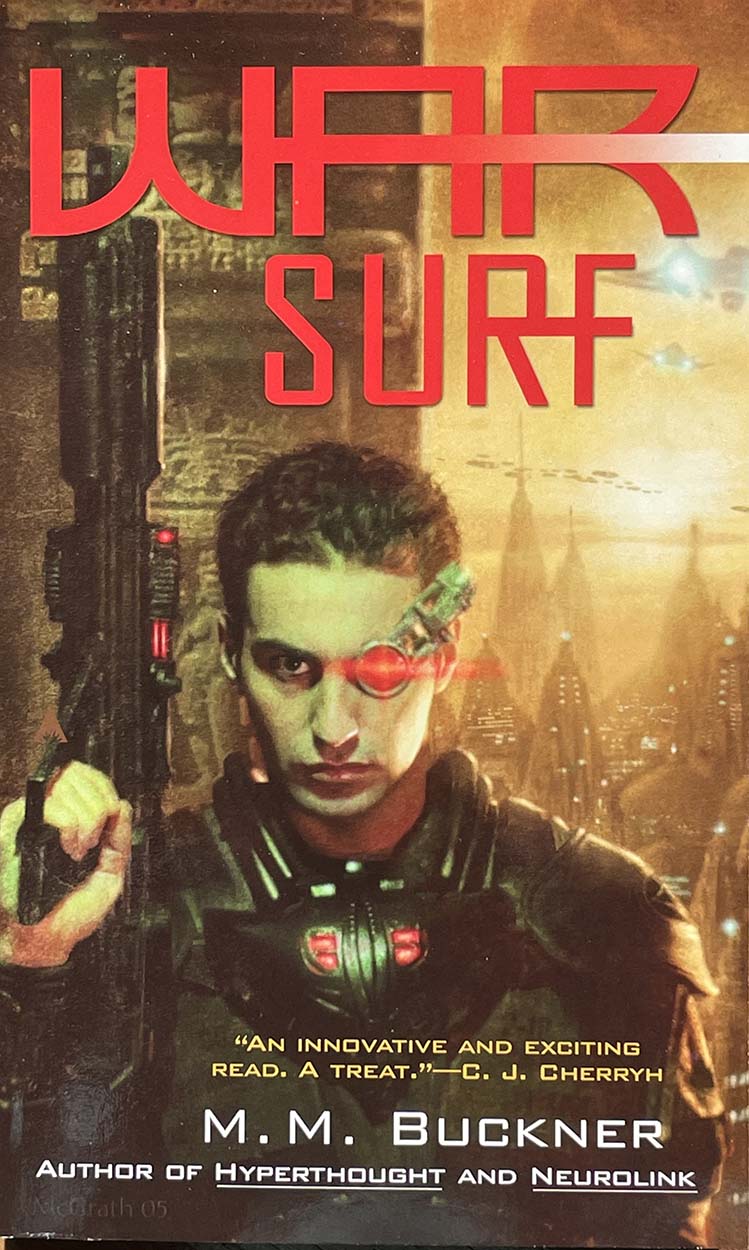 Nasir Deepra is 248 years old, rich, bright, vigorous, and virtually immortal thanks to advanced nanotechnology – but he’s bored with life. So he and his friends have invented a new thrill sport, war surfing. They dip into Earth’s numerous war zones and film their exploits for fans. But when Nasir gets trapped in a rebellious satellite orbiting earth, only his truly young physical therapist can save him – if she’s willing.

“An innovative and exciting read. A treat.”
— C.J. Cherryh

“Buckner hits another homerun…action, character, drama, and great science— it’s all here in the latest from the hottest author in this or any other star system.”
— Robert J. Sawyer

“War Surf is a much more intelligent, much deeper book than it seems…an ambitious and heartfelt novel with a fine ending…So the next time someone tells you that American SF is dead, ask them to add M.M. Buckner to the list of people that they ought to be reading.”
— Cheryl Morgan, Emerald City

Buckner layers War Surf with so many ethical, moral and religious undertones that I dare say any reader will find enjoyment on some level within these pages.”

Not having read any of this author’s previously hailed works, HYPERTHOUGHT and NEUROLINK, I approached this science fiction work as a Buckner virgin. Being a bit of an SF buff myself (writing some and being the grandson of Frank Herbert, author of Dune), I always approach authors new to this genre with a grain of salt
poised on my tongue. But here, I need not have worried.

Buckner layers WAR SURF with so many ethical, moral and religious undertones that I dare say any reader will find enjoyment on some level within these pages. There’s an underlying current dealing with mortality and the need for the rejuvenation of youth. There’s advanced biological technology that may or may not be helpful. There’s the recycling of humans in great nutrient vats. And, toward the end, there’s the obvious “eat and drink of me and you will live forever” religious parallels to Catholicism. This might sound a bit heavy-handed, but it’s not. Buckner has complete control over the story and never preaches to the reader. WAR SURF unfolds in a first person narrative through the eyes of Nasir, and it is through him that we learn the ways of this time and this Earth. Not once did I feel that the author was forcing information onto me (something that’s quite refreshing).

My only beef with the novel would be that Buckner occasionally utilized 20th century terms that took me out of the 23rd century and flung me back into my own time (i.e., jet skis, Chilli Diablo, etc.), but this was seldom.

If you’re looking for a wonderful SF read that doesn’t get bogged down in details and has great characters and a believable futuristic premise, you couldn’t go wrong here.

It Blew Me Away. By Nancy Fulda

This week I read M. M. Buckner’s WAR SURF. Wow. Waaaaooooow. I don’t know if it’s because Buckner’s a stellar author, or because I’ve been reading so much slush lately that my literary expectations have dropped, or because Buckner’s style is so different from the Bujoldian novels I typically read but, man, it blew me away.

This is not idle praise. Picture me in bed at ten PM, idly thumbing through the pages, thinking the teaser on the back doesn’t sound all that thrilling, thinking “This looks like military sci fi. I don’t usually like that stuff.” Imagine me opening to the first chapter and discovering that it’s written in first person, one of our major Baen’s Universe pet peeves. Now hear me grumbling to myself and thinking, “Well, Jason Sizemore gives Buckner high praise. Might as well give it a chance. One chapter. That is all.”Now picture me two hours and three chapters later, facing the intense moral dilemma of putting the book down and going to sleep like a good Mommy-of-children-who-will-wake-up-insanely-early or yielding to the dark side and reading the entire book in one sitting. (In case you’re wondering, I compromised and read one more chapter.)

It’s a heckuva good book. Okay, I have quibbles about some of the plot points, and since I’m a conservative reader, the level of sensuality was close to the edge of my comfort scale. And, well, okay. I had a major belief issue with the story’s resolution. But somehow, that didn’t detract from the satisfaction of the read. Perhaps because, by then, it was clear that the novel’s primary thrust is thematic rather than plot-driven.