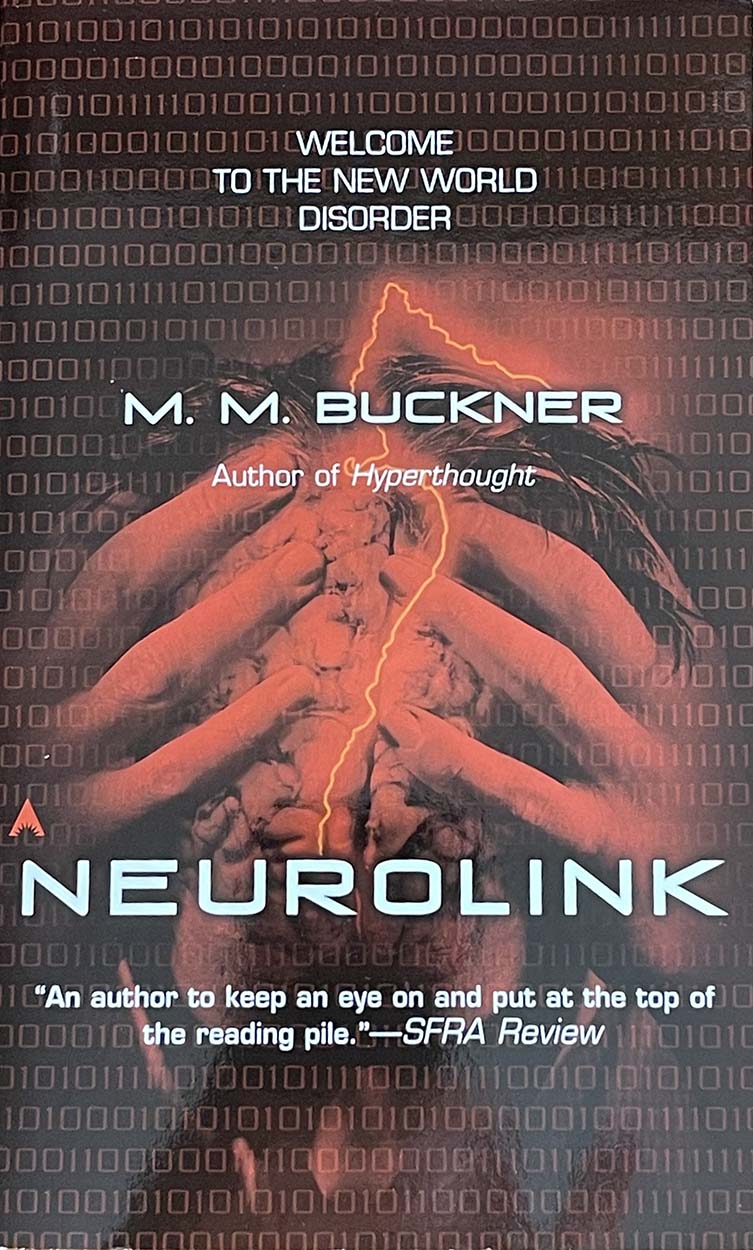 In the 23rd century, a rich powerful CEO of a global bank wants to live forever, so he makes two copies of himself: an evolved Artificial Intelligence imprinted with his personality; and a perfect clone named Dominic, whom he raises as his son. When the CEO suddenly dies, his son Dominic is left to deal with a terrible crisis, and though he loathes the egotistical A.I. masquerading as his father, they need each other’s help to stave off chaos. Which of them is the true copy, and which is fake? Does individual identity still have meaning? This book was first published as Neurolink, the later as The Coin Giver.

“Buckner has written an extremely interesting and thoughtful book. Keep your eyes open for other works by Buckner, you will not be disappointed.”
— Barry Hunter, Baryon

“Clever plot-twists and a better-than-usual sense of character… Its future is despicably believable, the action scenes maturely rendered, and its central dilemma intelligently resolved. Buckner is a skilled storyteller.”
— Mac Tonnies, reviewer

“[The main character] has believably human reactions to the individuals he meets, for both good and ill, and alters his assumptions about how the world really works only with a plausible amount of resistance and mental pain.”
— Elizabeth Carey, NESFA

Reviews of Neurolink / The Coin Giver

In the mid-23rd century the earth is in quite a pickle. The environment has been overwhelmed by global warming and pollution: the air and oceans are considered poisonous; the populations huddle together in enclosed cities in the far north and south. Society itself is overwhelmed by nearly omnipotent corporations, and the vast majority of humanity live as “protes” – protected employees who eke out a living under the boot heels of the “Coms”.

Dominic Jedes is a scion of the ruling elite, the cloned son of Richter Jedes, president of ZahlenBank. The elder Jedes has extended his lifespan to nearly three centuries, using genetic treatments and repeated organ transplants. But no amount of money can prevent the inevitable, and when Richter dies he cheats death by having his consciousness transferred into a Neural Profile (NP for short), “a new kind of bank for storing a person’s mind.” Like his father, Dominic is insensitive to the plight of the working class. When a decrepit mining submarine called the Benthica threatens to lose money for ZahlenBank, Dominic offhandedly decides to “set free” the protes who live and work on the Benthica. After all, liberating protes (thus eliminating their access to the Coms’ live-sustaining infrastructure) is tantamount to a death sentence. The protes die; the books get balanced; problem solved.

Except the protes don’t die; in fact, from a secret undersea location they start broadcasting an invitation to protes from all over the world to leave their Coms and join them! Now, a minor inconvenience has become a global crisis – with the protes agitating, markets stalling and the other Coms screaming, Dominic must find the Benthica as soon as possible and shut down that transmission!

As if Dominic’s job isn’t hard enough, he discovers en route that the NP has infected him with a “nanoquan” version of itself. Now he has the voice of his recently-deceased father riding piggyback inside his own head!

NEUROLINK is the second book by Nashville-based writer M. M. Buckner, and it’s a worthy, suspense-filled follow-up to her freshman novel HYPERTHOUGHT (which was nominated for both the Philip K. Dick Award and Scifidimensions’ own SESFA Award!). Set in the same futuristic milieu as HYPERTHOUGHT, NEUROLINK goes beyond cyberpunk’s usual fatalistic sensibilities – Dominic’s quest offers hope against seemingly impossible technological odds. It’s cyberpunk with an old-fashioned social conscience: think Neuromancer meets Metropolis. And since NEUROLINK is published in mass market paperback at a mere $6.99, it’s hard to get a better bang-for-the-buck. Those greedy Com bastards would be proud!

Twenty-third-century banker Dominic Jedes must cope with a high-tech replica of his tyranical deceased father as well as a worker rebellion on a sunken submarine. Log-line, Wall Street meets The Empire Strikes Back. Source of angst, the workers expected Jedes to offer a deal to rescue everyone, but “he was a banker, not a miracle worker.” Key concepts, utopian recycling, bio-modification. Lowdown, Dante’s Inferno goes cyberpunk in Buckner’s toxic future tale of working-class bravado.